Hey Friends. We will be closed for the Holiday weekend and re-open on Tuesday June 1st

But please be kind and follow these simple rules.
1.Only Three people allowed in the store at a time
2.Please we ask you to wear a mask.
3.You are to leave all service work outside to be cleaned
4.Please be respectful and practice safe distance
5.please be patient

Visit us on Social Media! 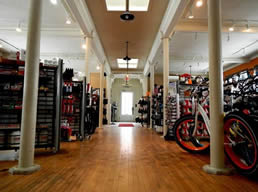 Jack’s Bicycle was started in Dearborn, Michigan in 1936. Dora and Edward “Jack” Goocher started the business with just $55 and a lot of ambition. Jack rented a small wood building on Mason Street in Dearborn next to the Stag Bar. With just four Columbia bicycles purchased from Montgomery Wards, the business was started.

Jack’s Bicycle now has two locations, one on Michigan Avenue in Dearborn and the other in Monroe on South Monroe Street. At one time, Jack’s had four stores, three in Dearborn and one in Lincoln Park. The original store on Mason street store was closed in 1955 when the city condemned the building to put in a parking lot for the businesses on Michigan Avenue. Jack’s then bought the building on Michigan Avenue and moved to it’s current location and has been doing business there ever since. The store in Lincoln Park was eventually sold and the other two other stores were closed. The Monroe location was opened in December of 1994 by grandson Scott Goocher. Brian Goocher runs the Dearborn store.

The Goocher family has always been entrepreneurs. During the Second World War the family manufactured tricycles. 10,000 tricycles were made in three different sizes, 12”, 16”, and 20”. Since all other bicycle manufacturers were in war production, Jack’s tricycles were sold all over the country. The government eventually shut down the tricycle business so the steel could be redirected to war production. Before being shut down, the family was earning a one dollar profit per tricycle.

Jack’s has always been a family store. Originial customers are now bringing in their grandchildren and great-grandchildren to buy bicycles. The store has focused on delivering excellent quality service, which is why people keep coming back.

Jack’s supports cycling in the community many ways. You may see a group of Cub Scouts in the store learning about bicycle safety, or see Scott leading a group of Boy Scouts working on the Cycling merit badge. Jack’s also works with cycle clubs to promote cycling, hosts bike rodeo’s and safety talks, and worked with the city to develop and maintain the Munson Park mountain bike trail.

In 1998 the Monroe store sponsored a show of the Schwinn freestyle team. The freestyle team performed twice and signed autographs after the shows. The riders had been seen on the X Games. Some of the riders were Jay Mirron, Dave Osato, Andrew Farris, and Joey Garica.

The Dearborn store is located at 24308 Michigan Avenue, a half a block west of Telegraph. The 5,500 square foot store carries about 350 bikes in stock at any one time. The Monroe store is located at 206 South Monroe Street in downtown Monroe. The store stocks over 250 bikes, including BMX, children’s, mountain, road, and recreational bikes. The building is 3600 square feet, and was originally the headquarters for Greening’s Nursery in the early 1920s. Looking around the store, the multiple skylights and the restored art deco moulding give the entire space its own storyline and distinctive flair. The store is situated in historic downtown district, with the River Raisin Heritage Trail accessible by bicycle from the parking lot.

The Goocher Family will continue to service the cycling community for many more years. Their passion for cycling and quality runs deep. Jack and Dora’s grandchildren are now carrying the torch that there grandfather lite. You may even see the great grandchildren stopping in to assemble a bicycle now and then.

Check out our Vendors!